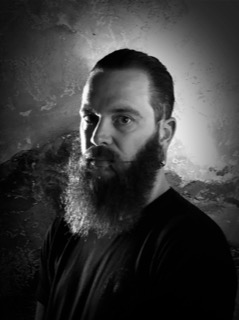 Oak Adams is a black & grey artist from the United States.

Drawing inspiration from artists such as The Gurch, Paul Booth, Todd McFarlane, Pushead and The Darkness comic books, he knew early on that the darker side of art was what he wished to pursue.

He picked up his first tattoo machine on his own in 1995, but secured an apprenticeship in Indiana with Dave Pritchard in 1997.